Patty with her “Big Sister”, Diane Campbell LeFiles in the dorm after the New Member (pledge as it was called then) Ceremony
Most of us have a vivid memory of the day 518 W. Park became home and Alpha Chi Omega entered our lives.  I needed Hera and a few good sisters to guide my way!  As a freshman, I went through formal rush/recruitment but my stars did not lead me to sorority membership.
That spring, I began dating my future husband and became friends with several Alpha Chi sisters who were dating his fraternity brothers.  Returning for my sophomore year, I discovered that my dorm neighbors were-you guessed it- Alpha Chis.  I did not join in formal recruitment, but my BH friends made sure that I was a frequent guest at 518.  Hera had saved room for me, and in January I received my bid to become a member of Alpha Chi Omega.  We had a small pledge/new member class of 7.  At the big-little sis reveal, my big sister was none other than DC, one of my dorm neighbors.  Our bond remains connected, and we enjoy our Beta Eta reunions.
One of my pledge sisters became my roommate for the following two years.  After graduation, I married my Alpha Chi sweetheart and there were three Alpha Chi sisters in our wedding carrying nosegays of red carnations.
As an alumna, my Alpha Chi friends, experiences, and involvement remain an integral part of who I am.  However, each time I visit, I feel the special bond to Beta Eta and eagerly search for my brick in the drive of 518 W. Park where my lifetime commitment began.  There is no doubt when I am greeted by my sisters, the current residents of 518, that the Beta Eta legacy of love, sisterhood, and excellence continues. 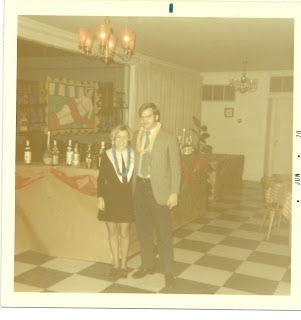 The above picture is at our Spring Weekend at the Alpha Chi Omega chapter house. Patty is with her future husband, Walter.  Some will recognize the old tile floor.